April Grant is famed for ballads, sea music and a broad repertoire of poems and folktales. 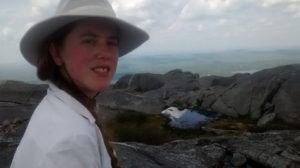 April has appeared at the Mystic Sea Music Festival, the Portsmouth Maritime Festival, and the New England Folk Festival. She has told stories and sung songs everywhere from the Vanilla Bean Cafe (Pomfret, CT) to the Glenfarg Folk Club (Scotland) and The Story Space (Cambridge). Her stage persona has been described as “charismatic,” and her song choices as “riveting” and “playful yet sinister.”

April is a mainstay of singing circles in the Boston area, and makes her home in Somerville, MA. She has taken her skills as a storyteller, unaccompanied singer, and poet to traditional music venues and literary conferences in the US, Canada and the UK. Believing that unaccompanied singing is important in telling the story to be told, she carries whole concerts solely with her voice, though she also plays a little guitar from time to time.

April got her start performing in singing and storytelling settings such as the Pioneer Valley Song and Story Swap, the main stage at the Black Sheep Cafe (Amherst, MA) and the Fire & Water Cafe (Northampton, MA). Through festivals and events such as the Mystic Sea Music Festival, the Old Songs Festival, the GottaGetGon Festival (held by the Pickin’ and Singin’ Gatherin’ in upstate NY), and Pinewoods Folk Music Week, April has enjoyed opportunities to hear, meet, and learn from traditional singers and folk revival performers, and people who love old songs. Longtime personal idols include David Jones, Louisa Jo Killen, Judy Cook, Brian Peters, Sara Grey, Margaret MacArthur, Gordeanna McCulloch, Lou and Peter Berryman, Martin and Shan Graebe, Tom Lewis, Dave Webber and Anni Fentiman, Will Noble and Denise Norton O’Sullivan. Please take a break from reading this bio, go and listen to one or more of these people, and come back after that.

In an effort to perform songs no one else has already claimed, April took up songwriting a few years ago, and has been delighted to find that a lot of people don’t realize she’s a songwriter. She tries to make her work blend with traditional styles, so she can gauge her success by the fact that her songs are often mistaken for being traditional. (Mind you, she’s also flattered when people ask whether she wrote the song “The Charming Young Widow I Met On The Train,” which has happened more than once.)

At time of writing, April has made one live recording, “The Lady of Northampton,” a solo concert at the much-missed Fire & Water Cafe in Northampton, MA. She appears on two studio recordings, historical album “Buckskin Heroes: Songs Of America’s Wars Afloat,” documenting conflicts in song from colonial New England through the nineteenth century, and marine biology-themed album “Songs of the Sea Creatures” in collaboration with her mother, songwriter and zoologist Sue Grant (aka Dr. Susan T. Grant).

April is lucky to be in a mother-daughter loop of song inheritance, having first learned songs from her mother. Dr. Grant’s huge repertoire of songs and ballads has been acquired from folk revival performers, printed collections, and Girl Scout singing traditions. Together with April’s father, Don Grant, they have enjoyed singing at festivals, on car trips, and by campfires, throughout April’s life. 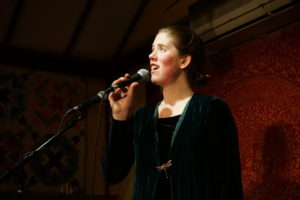 I’m delighted to announce that I’ll be the featured performer at Adult Folktale Telling’s gathering in March! The second half of the evening will be my performance, “This Will End Well: Tales Of Daring.” Come and enjoy fictional characters’ poor life choices. These tales tell of people who saw what they wanted and went […] 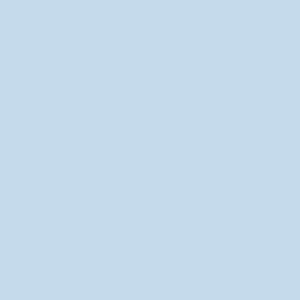 I’m on a podcast! Aaron Tornberg, bard of Lowell, MA’s The Hearing Room, kindly interviewed me on The Woodshed Podcast this past Saturday morning. Come for the original songwriting, stay for the library love and album recommendations: The Woodshed Podcast, featuring April Grant

NEFFA-going friends – I am pleased to announce that multitalented singer Rebecca Maxfield and I will be doing a concert together, on Sunday from noon to 12:50, in the High School, room 126.

More
We use cookies to ensure that you have the best experience on our website. If you continue to use this site we will assume that you are happy with it.Ok