Here’s my flash fiction, “The Finger,”at Fireside Magazine, edited by Julia Rios and published in May 2018. 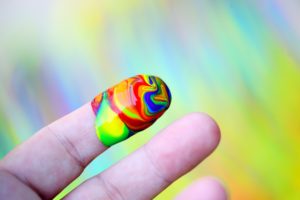 “You’ll never be at a better time in your life for this to happen,” said my father. “You’re really healthy; even for a college student, you’re fit. You can get it over with now, and then you’ll be safe forever.”

“I dunno, what if I got an infection and lost the whole hand?” I said. A lone car passed us and I watched the red taillights glide off into the night. It occurred to me to wonder what the people in the car had thought of us, parked on the shoulder of the road, next to the Conservation Area woods, in a minivan, far from any streetlight. Maybe they thought we were drug dealers.

Dad gave a sigh, letting the silence continue till it was almost unbearable. I scratched my arms to stop myself from being the first one to speak.

“Look,” said Dad at last. “All you have to do is just go to the range, wrap your finger across the muzzle and pull the trigger. Bang. Your hand slipped, it was an accident, they call an ambulance, you’re done.”

“Ambulances cost money.” I fixated on that, because expense usually made the difference when he decided against anything.

“Mom and I will pay for the ambulance. We’ll pay for your hospital bills.” I was almost certain Mom did not know about any of this.

“Honey,” Dad went on. “You’ll just be in a little bit of pain for a short time. And then you’ll be safe.”

We stared at the stubble of weeds on the side of Route 2.

Dad slapped the steering wheel. “What are you thinking?”

“Jesus, honey, this is like pulling teeth. What’s the matter?”

“I might want that finger, for playing the guitar. Or typing.”

“You can re-learn how to type, and you don’t know how to play the guitar. If you wanted to, you’d be doing it already.”

“Send me to Canada,” I said, ramming my hands between my thighs. “I want to go overseas, like Mom was talking about.”

“But, honey, we’d never see you again. Me and Mom want to keep you in our lives. Also, we can’t afford it.”

I wondered how the cost would compare to that of having a doctor repair my hand after I shot off one index finger.

If I hesitated any longer I would lose my nerve. “I gotta say no.” My heart was racing and the woods outside seemed to glow red with the force of my fear. “I get that you’re concerned for me, Dad, but this is something I can’t do.”

He didn’t move a muscle as minutes passed.

“Do you want to kill people?” he said at last.

“Do you want to have a warden reach into your rear end and dig around to see if you’re hiding razor blades? That’s what happens in jail. And you go to jail or else they make you kill people. That’s what wartime is, honey. That’s what it was when I turned eighteen, and that’s what it is now you’re old enough to be sent to kill.”

“But when you were sentenced, the judges—”

The pain in his voice had been familiar to me since I was five, when I first asked Dad why he had been in prison. But this time, I didn’t stay to listen. I threw open the door and jumped down, tripped on a rock and fell on all fours in the dewy stubble. Up again, I ran down the road, wet and dirty and wondering whether I had ticks on me. Dad screamed after me, but I didn’t stop.

I feel a horrible impulse to write, “I moved out of my parents’ house and now I will live in the woods forever.” Or, “I shall now conclude this manuscript and sever my right forefinger, in obedience to my father.” Neither of those things is the case. I walked the three miles home, with Dad pacing me in the van and yelling at me from time to time. The next day, Dad got drunk on a bottle of vodka for the first time in years, and cried with my mother holding him.

I don’t know what he told her. She walked around with big, sad eyes, ignoring me and speaking only when necessary, until I went back to college two weeks later. I do know that Dad has never willingly hugged or touched me since that night.

Since that conversation, I’ve taken on as many work-study jobs as I can. Anything to keep me from having to go home. Maybe, between work and my loans, I’ll never have to.

And maybe the draft will pass me by. Maybe I’ll go to jail or cross the border. A girl in North Quad pulled a stunt where she ran around pissing on herself and meowing in order to be sent to a mental hospital. I don’t know if even that will keep her out of the Army.

Sometimes I dream Dad is standing by my bed, begging me to let him shoot my finger off, to be safe forever. Tears stream from his blue eyes in impossible rivers. You’d think I would be callous by now.