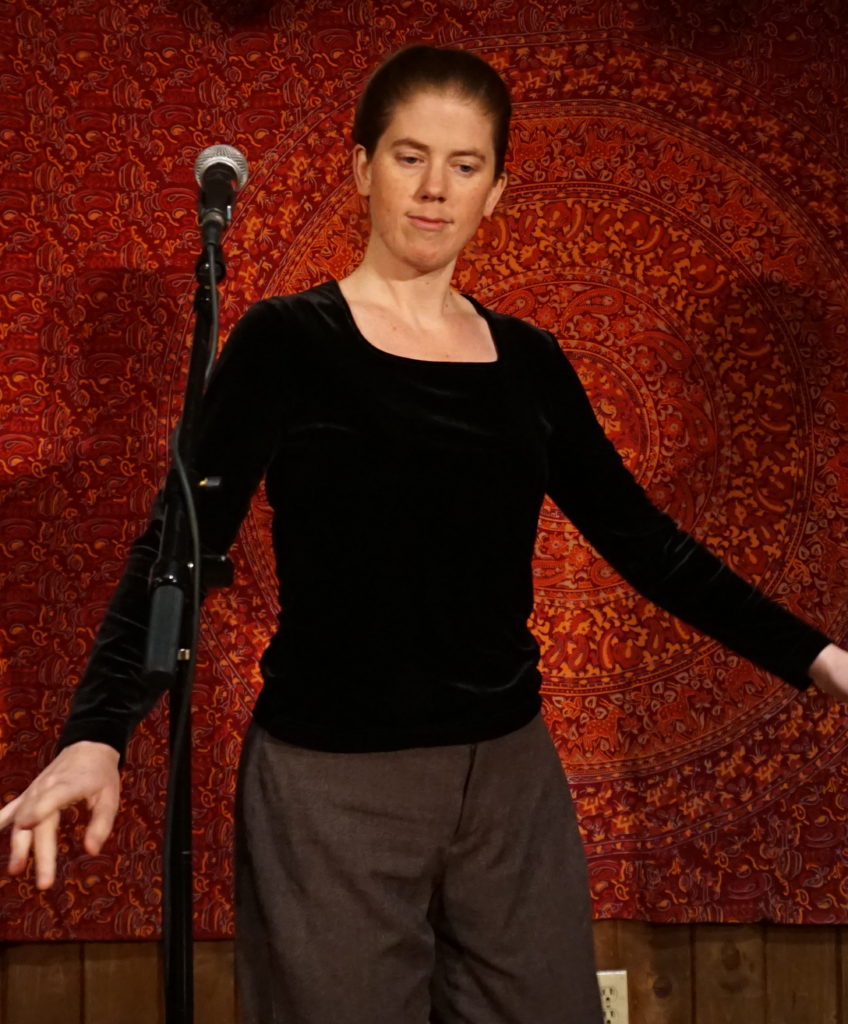 An evening of songs, ballads and stories with happy endings. Or baffling outcomes. Or endings where rocks fall and everyone dies. These tales are all united by villainy, as April presents the audience with a feast of stories about awful people, the harm they do, and those who sometimes defy them.

The villain isn’t always obvious; this show is also about unusual beings and the differently heroic, and even the most cynical audience can be kept on the jump by April’s stories. Would you like to hear about a werewolf? Of course you would. She’s a Breton werewolf with marriage problems, and she’s not the villain.

In these traditional and recent songs and stories, the Devil walks the earth to tempt women, wicked stepmothers turn you into icky creatures, and Dorothy Parker rises from the dead for a second career as a bank robber. Hang onto your wallet, your life, and your human form. There are even nice little singable choruses and audience participation.

This show, like all of April’s presentations, comes in a one-hour version and a ninety-minute full show (with or without an intermission). “Villains!” is suggested for ages ten and up, since the Adult Themes include death, violence, and poor romantic decisions.

Narratives which may be included in this show include:

“The Concrete Frog Murder” (song by April Grant and Katherine Nehring), on a mysterious disappearance and a nice old lady.

“The Wreckers” (song by April Grant), a salute to the people of that one quaint seaside town who set false lights to wreck ships and then head down to the beach with a shopping bag and a blunt instrument.

“Burke and Hare” (song by Robin Laing), wherein you can take your pick of villain: two lowlife murderers, one respectable professor, The System, or all of the above.

“Gold-Tree and Silver-Tree” (traditional story), a forerunner of “Snow White” in which a mother tries to kill her daughter for being attractive. There’s also a talking fish, death magic, and heroes who are able to learn from their mistakes.

“The Charming Young Widow I Met On The Train” (song by W.H. Cove and John Parry, 1840), on the struggles and eventual triumph of a bereaved woman traveling alone by rail.

“King Ironhead” (traditional story): of a smug sexual harasser, and the three sisters who defy him.