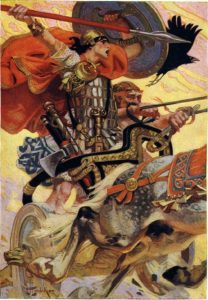 “The first warp-spasm seized Cúchulainn and made him into a monstrous thing, hideous and shapeless, unheard of…His heart boomed loud in his breast like the baying of a watch-dog at its feed or the sound of a lion among bears. Malignant mists and spurts of fire flickered red in the vaporous clouds that rose boiling above his head, so fierce was his fury.”  [translated by Thomas Kinsella]

Táin Bó Cúailnge, or “The Cattle Raid of Cooley,” is an Irish epic poem about a cool bull, an envious queen, a war, and a seventeen-year-old demigod who loves to slay (see illustration at left). It was first written down in the twelfth century, and was still in oral transmission as of 1959; it’s inspired people down the centuries, in Ireland and throughout the world, and it’s sometimes known as the Irish Iliad.

Storytellers April Grant and AZ Madonna present a fast-moving two-person show offering a Best Parts version of the Táin, drawing from Thomas Kinsella’s translation as well as later folktales. This show is violent, gripping, raunchy and hilarious, and gets the audience involved in the storytelling with visual humor and active participation. Some parts of the story we sum up in a few sentences, while we perform other parts as full tales in all their grandeur. If you’ve never heard or read the Táin, this is a great introduction, and we’ll pass out a recommended reading list afterwards. If you already know and love the Táin, you’ll find it all the funnier, and there will be some inside jokes just for you.

This show lasts about one hour, and is performed without an intermission. It’s rated PG-13 for violence, swears, sex, and poo and fart jokes. This is adult content in every sense. Please be aware that we cannot perform this show in spaces where young kids are present. (Teenage audience members are OK with us — please use your discretion.)