It may be news to you —
I know it was to me —
No US submarine
Is ever lost at sea.
But every Christmas Eve,
The Navy reads the roll
Of officers and men
Still on patrol.

In canyons of the sea-bed
That never see the light,
We gather round the radio
On this December night,
Listening to the static,
Great whales overhead,
And things deep below us
That only fear the dead.

A warm voice calls out
Through static and through noise,
“We’re thinking of you here at home,
So Merry Christmas, boys.”
We weep and hug each other,
We laugh with joy to hear
The living recall us,
Year after year.

Our mission isn’t done,
And none of us can sleep.
There are things deep below us
In the belly of the deep,
The living could not face,
The living need not know.
While we are on patrol,
Deeper we’ll go. 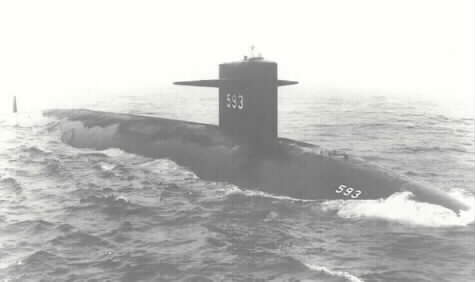 This song is not based on a specific incident, but the above image shows the sub USS Thresher(SSN-593). More about her here.

This song is based on the United States Navy’s tradition of considering the submarines lost in World War II, or perhaps all Navy subs lost at sea, as being “still on patrol.”  The people who contributed to this long, wonderful Tumblr post came up with the ideas for this song; I only had to make it rhyme.

“Still On Patrol” won first prize in 2019 in the Portsmouth Maritime Folk Festival’s annual songwriting competition; photo of the finalists to be added here as soon as I secure permission.
Please go here for the lyrics in a printable Google doc.

Recording:
A live recording of me singing “Still On Patrol” (link goes to Soundcloud).